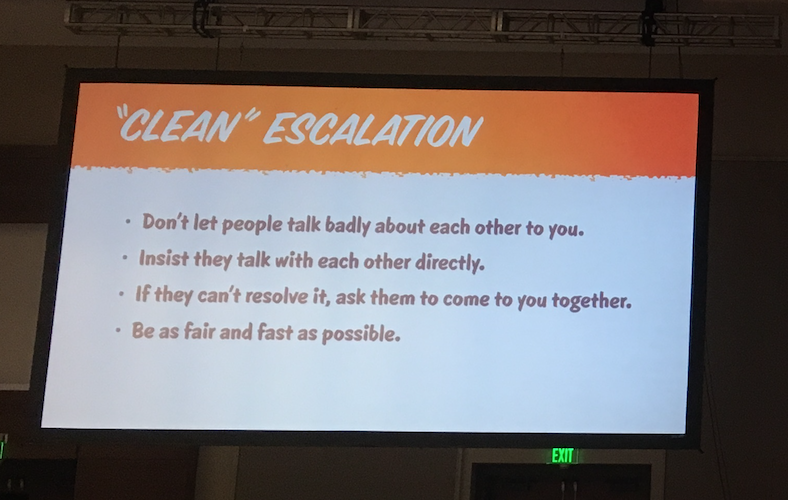 Friday is here – that means it’s the last day of the conference. Talking with folks, it sounds like the party was a lot of fun last night. Because I need to travel next week too, I decided to rest up instead of going. The painted surfboard turned out gorgeous!

Learning about how to help with Agile2019 – Christina Hartikainen

For the last two years, I’ve loved being a Track Reviewer, and I attend this session to learn how I could do even more. I’m especially interested in becoming a Track Chair for Agile2019.

I was pleasantly surprised at the number of folks who attended the session, and Christina led a good discussion about what it was like to play all of the roles and helped created excitement for Agile2019.

If folks are interested in signing up, you can use this Google form.

The last keynote was Kim Scott and her philosophy of Radical Candor. I’ve read the book and am familiar with the practice, and it was great to hear from Kim herself and get a little context with her funny and enlightening stories.

I especially liked the deeper story regarding the presentation situation that caused Sheryl Sanberg to give her that critical feedback in a caring way. Apparently, when Sheryl was giving the feedback that Kim says “um” too much in presentations, Kim would move her arm in a dismissive way. This caused Sheryl to say, “I see I need to be more direct with you,” and that generated the feedback that “say ‘um’ made Kim sound insecure and stupid.  A recap of the story can be found here.

The reason it was so effective is that Kim knew that Sheryl cared for her in a personal way and that Sheryl’s concern for short-term feelings didn’t stand in the way of longer-term gains that could happen from the feedback.

Kim then digs into why this can be a barrier, and it’s usually because of a couple of reasons:

She then covers the quadrant and emphasizes that the goal isn’t to put names in the boxes, but to use it to drive conversations.

Then the conference wrapped up with appreciations and the announcement for Agile2019, which will be in Washington, D.C. and Christina Hartik will be the Conference Chair. Leaving San Diego with lots of learning, excitement and information to share with folks back home! Thank you!