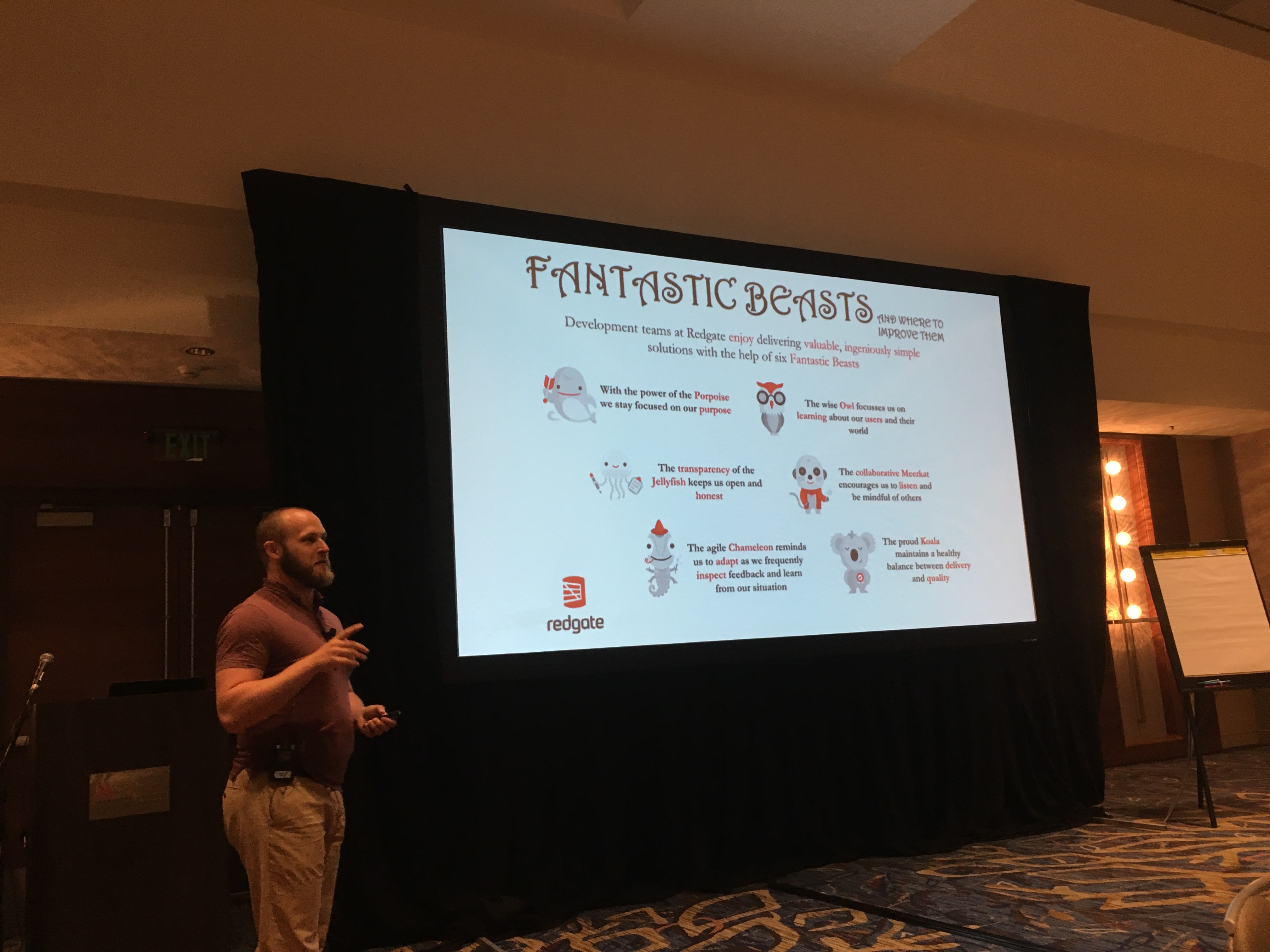 Ah, Day 5. That mix of, “wow, it’s been an intense week,” and “where did the time go?” I’ve enjoyed the routine that I settled into with working out in the morning, doing some work, enjoying the sessions, having a break at lunch, and then back to the sessions in the afternoon. I haven’t attended many of the events in the evening because I’ve either had small group events and/or I don’t want to burn myself out.

The Agile of Agile – From Operational to Strategic Agility – Steven Denning

In Steve‘s session, I found myself taking photos of almost every slide he presented (yes, yes, I know they’re posted – but for me the context of the photo helps my recall).

Feedback from The Drucker Forum in 2014 was negative on Agile in that it is only for software, doesn’t scale, can’t handle complexity, isn’t reliable and it doesn’t last. Around this time, the comment was also made that “a firm with a name like a piece of fruit isn’t serious,” which was made by the former CEO of IBM in HBR.

In 2015, the SD Learning Consortium started to dig into Agile and its benefits.

Steve then started to describe that Agile is an age, much like the Bronze, Industrial, etc. He shared how mindsets have shifted with various reformations and revolutions (aka “big deals”). He’s even partnering with a filmmaker to create a documentary on Agile in plain language for the general population.

What we’ve learned from these “big deals”:

The SD Learning Consortium also set out to figure out what “real Agile” is, and what they found was:

The Law of the Customer

The Law of the Small Team

The Law of the Network

Instead of top-down, command and control, the organization functions as a fluid network, which is a huge culture shift.

Below is a summary of the evolution of Agile and Operational Agility:

As Steve points out, “operational agility doesn’t make much money,” and he covers the “sad facts about making money from Agile…”

Operational Agility may make better products, but it may not make much money, that’s where Strategic Agility and finding market-creating innovations that bring in new customers.

To create these market-creating innovations, he offers the Innovation Playbook – NABC.

He offers the following kick-starters to Strategic Agility:

Loved the energy in this session as Elizabeth and Gareth shared their story at Redgate when they wanted to improve how the teams were working. Redgate is a good size firm in the UK, and in general people were happy; however, they had lost their “mojo.” They had become reliant on specialist roles, and when it was tough to fill those roles in a competitive job market, the teams had started to exhibit a “learned helplessness.”

What they wanted was: engaged, motivated teams, teams feeling effective, and product development fit to scale. They leveraged learnings from Danial Pink’s Drive, David Marquet’s Turn the Ship Around and their values (mostly “do our best work” and “don’t be an a**hole”).

They restructured the teams to create more shared skillsets and fewer specialist roles. Most project managers moved into the Development Lead roles and the Product Managers were responsible for understanding what’s happening in the market and how does that need to be reflected in the work.

They quickly realized that one challenge was the word “autonomy” because it has a vague meaning – some teams thought it meant freedom to do whatever they wanted. It came with a lot of baggage and assumptions. However, the organization meant “aligned autonomy.” Teams need to be aligned to a purpose and the work needs to be in service of that purpose.

To create that alignment, they first tried contracts for the team to the “business.” However, what that created was an “us and them” mentality that wasn’t beneficial. So they pulled that back – I admire their honesty and candor with the organization that they “tried something, learned, and need to adjust.”

So they started with a blank canvas with the teams to create the principles by which they work, and gosh darn it, they are super sweet. (They’re childish too, which both presenters fully admit). What they ended up with was the Six Fantastic Beasts.

Each goes a little deeper:

They then built in a system where the teams are regularly rating themselves on how they’re working in line with the principles.

They also learned that when the Technical Team Leads moved into a leadership position, they needed to understand what attributes they’re looking for in their leaders.

To recap their learnings:

I was playing a dual role in Faye‘s session – one as a participant because I wanted to hear her information and as an observer to give her feedback as part of the Feedback Experiment that Agile Alliance is testing out for speakers.

Faye’s session shown a light on why it’s important for organizations to talk about how to create that space for learning, and she shared some of the common thinking about learning in the community, for example:

As someone who values learning, those statements scare me that there are folks in the workplace that hold those beliefs strongly, so I see why it’s important to not only keep the conversation going about why learning is important but also amplify it.

In technology, we also have so many “known unknowns,” which requires that we learn quickly to make those unknowns known and uncover more known unknowns.

Faye then did a deeper dive into how agile supports learning with the transparency to inspect and adapt and how the Agile Manifesto principles align. When looking at the labor force through history, there have been Manual Workers, Knowledge Workers and now we’re moving to Learning Workers, where individuals need to be able to learn on the fly. She gives the example of most developers aren’t working in the same tech they were when they started and may not even be working in the same tech as a year ago.

Learning is also not just sitting in a classroom with uni-directional information, we learn through experience and that’s why the Growth Mindset makes all the difference. Work is basically learning.

What do we know about learning?

And what can we do?

Cultivating a space for learning requires leadership support, which includes:

Really enjoyed Faye’s session and hearing from participants on what they’ve learned so far this week and creative thinking on the small steps that they can take when back at work to implement those learnings.

Full transparency, I attended this session because my first pick was full, and it was in the next room. However, I’m so glad that I did! I’m also glad it was videoed because my tired brain will not be able to do it justice.

I really liked how he shared the tips and tricks for various trainings to be able to not only teach agile concepts, but also leading an organization through a large change.

Below is an example of how he matched pictures with the 12 Agile Principles – the pictures help the principles “stick.”

In manager training, he shared a game where there are behaviors listed and managers need to have a dialog of whether or not they are “ok” in agile.

He shared an example journey chart:

For visioning, he shared the following:

Which then allowed for an Improvement Roadmap to be created:

And a Change Management Matrix:

He also covered items like the financial benefits of having a ScrumMaster, an approach for how to handle an acquisition scenario and ways of getting more traction, ensuring that there is ongoing improvement and limiting fatigue. It was an excellent session, and I’m so glad it was videoed. Be sure to check it out.

Still can’t believe this was the last full day of the conference. It’s been a wonderful time, and I’m excited to go home tomorrow.