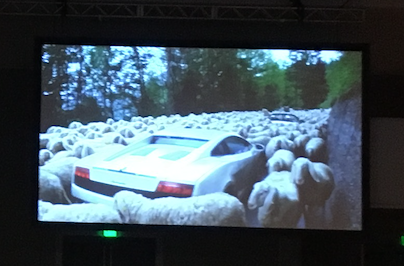 Trying to stay on Chicago time, so I got up really early to take a spin class, then it was breakfast and a couple of work calls before heading down to the Wednesday keynote, which was quite funny! I won’t be able to do it justice with my recap, so definitely watch the video when it’s published. Brian Button did a quick overview of the remaining program, a mid-week check-in and then introduced the speaker.

Loved Troy‘s style – in his opening, he lovingly “stole” a couple of concepts from David Marquet (Turn the Data Around) and Joshua Kerievsky (Modern Data). My apologies for the not-so-great pictures, I was in the back of the room because I needed to leave a few minutes early.

He also opened with the line, “let’s talk about something we all agree with, #NoExstimates,” which got a lot of laughs from the audience.

He talks about when dealing with data, there are no absolutes. It’s known to be boring, and the magic happens when it becomes beautiful and creates action from decision-making. It’s where you take something that’s really big, and narrow it to create that story.  He shared weather data in its raw format, which isn’t very beautiful or helpful to most people, and then showed that same data on the wind site, Windy.com, which takes the data and creates these beautiful models of the wind patterns.

Another example is this video from Hans Rosling on 200 countries, 200 years, 4 minutes – The Joy of Stats.

The agile community call to action was: Having the data isn’t enough. You have to tell the story that leads to the right action.

Getting into our confirmation bias, Troy states that our stories (from data) need to be powerful enough to dislodge that bias, and most importantly, the only thing data should do is start a conversation and ensure that we’re not pre-judging without the context. The fastest way to get crappy data is to embarrass people. The fastest way to destroy the utility of historical data is to make people feel unsafe.

The agile community call to action was: We need to find safer ways to capture and utilize data from teams and organizations. Safe = better data and happier people

One sign of this is what’s called the Watermelon Status – green on the outside, red on the inside. He shared a story about how he was not setting up his organization as one that accepted bad news and that was an issue. For example, he says that he’s sure that Blockbuster Video’s status reports were all green right up until they ran out of money and had to shutter the doors.

Having pure predictability leads to limiting risk-taking to create bold and innovated products. An outcome is a very uncertain thing; however, you don’t learn as much from an expected outcome as you do from an unexpected outcome. The question of “how long” can be used as a tiebreaker when making a decision, and the guidance is to come up with that guess as quickly as possible.

The agile community call to action was: We need to find better ways to measure outcome rather than output. We need to balance our predictability with creativity and novelty.

He walked through how Google Maps helps us deal with uncertainty. When we enter directions, we’re given route options with durations, not ETAs, because we haven’t left yet. The ranges that are given allow you to make a decision of when to start – for example, if the duration is 20-50 minutes, and you’re meeting with a senior executive, you probably want to estimate 60 minutes. But, if you’re just casually meeting friends who don’t mind exactly what time you show up, the leaving (starting) time can be flexible.

The question to ask at that point is how important is “it,” and he also points out that forecasting is to let you know when to start. He believes that the reason most projects are late is that they start late – either the actual start date or just the paper start date and people are continuing to work on other tasks.

He recommends that the earlier you talk about scope, the better. Also, acknowledging that you will be wrong and will learn what we didn’t know – the secret is having an early warning to course correct before it’s too late.

The agile community call to action was: We need to incorporate new information faster. Deployment ends speculation (do this more often).

When forecasting, congestion causes us to not be able to do it effectively. He shares the analogy of someone who bikes to work vs. sits in traffic. It’s likely that the biker has a little more effective forecasting about his commute time; however, with traffic, the congestion can cause forecasting to be not so effective. Or, no matter how fast your car goes, it doesn’t matter if it’s stuck in sheep.

Unfortunately, that’s when I needed to leave the session. Look forward to the video!

Say It So They Can Hear You: Providing Meaningful Feedback – Jennifer Dyni

Jennifer did an amazing job with her talk. It was helpful, to-the-point and had some really fun interactions during the session. I even did Improv!

She highlighted how feedback is a powerful tool for influence, and then got into the various frameworks for how to provide (and receive) effective feedback. Feedback is asking someone to change, and one’s tolerance for change varies, so our approach to how we provide feedback will adapt.

Going Beyond “Are We Doomed to Sticky, Tricky, & Icky?”: Shining a Light on Sexism at Work – Sharon Buckmaster and Diana Larsen

This was one of those sessions that you wished could have had at least 90 more minutes because the conversation was so rich. Sharon and Diana took a group that was pretty evenly split between men and women through an important conversation. They started with individual stories of discrimination and harassment in the workplace and quickly created a shared goal for attendees that we were all there because “we care about what’s happening to women and others at work.”

First, they did an up-front set-up to level the amount of information regarding statistics of sexism and harassment in the workplace and unify definitions across the group.

They shared tips for bystanders, which generated a conversation of other things that could be done.

Bystanders can also say, “that joke/comment wasn’t appropriate.” A participant chimed in and mentioned that they’ve found it helpful to say, “Can I just check? What was your intention?” to help discuss the issue at the moment from a place of curiosity and good intent.

We then did a table exercise where there were notecards with real-life stories of women who have been harassed and/or discriminated against in the workforce, and we needed to play various roles – the storyteller, the manager, HR, the bystander and observer. The stories were difficult, and I immediately had a lot of anger and empathy. However, the discussion generated was a great one about how we would handle something from the stories if they were happening real-time.

After a few stories, the audience then got back together to talk about strategies and tactics to prevent these types of stories from happening. We discussed that it’s better to over-support and be corrected vs. to under-support. And, the importance of a woman’s direct supervisor and the impact that relationship has on whether or not she stays in the technology field. I appreciated my tablemates’ openness and candor and even sharing some of their own stories from all genders’ perspectives.

The Power of Storytelling in Agile –  Mark Cruth

Mark led a very high energy session, which was what was needed for the last slot of the day. It was a lot of fun, and I really enjoyed the interaction with my storyteller partner.

Mark describes how a story is an account of events that are causally connected in some way, and that a good story will suspend our disbelief. While we understand data with our heads, we usually end up making decisions with our hearts, and that’s where storytelling comes in. Stories are like water to fish, ever present, and they’re a part of history.

Studies have shown that the narrative that stories provide increase retention by 22x, so we’re more likely to remember information and data.

There is also fMRI stories where the storyteller and the receiver will enter into the same brain wave pattern, which he describes as the Storytelling Cocktail.

He then gave us tips and a framework to add to our storytelling framework.

I highly recommend reviewing his presentation sides and the storytelling framework. Mark – thank you again for your high energy, passion for the topic and helpful information!

After Mark’s session, I met the Women In Agile program team for a celebration drink and retro! Lots of great ideas already in the works for next year!