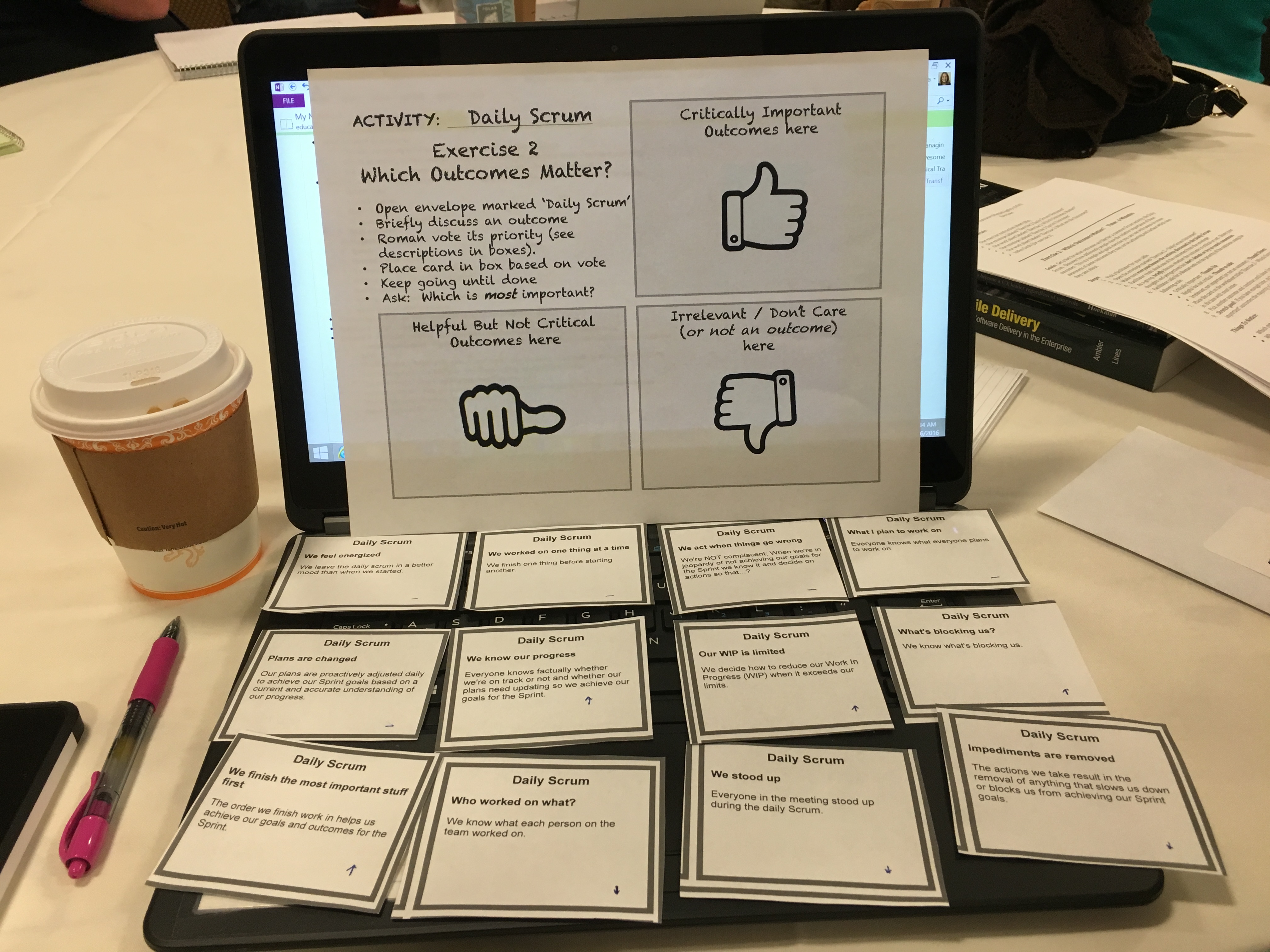 In the orientation session, they say, take time to relax and take time out, they’re not kidding! There’s so much information that my brain is now completely fried, and I’m so glad that the panel discussion at the end of the day was recorded, but I will need to watch it again.

Let’s start at the beginning. My first session was Outcome Oriented Agility: Transformations that work with, rather than against, cultures by Jay Packlick. It was one of my favorite sessions of the conference so far. He’s very down to earth and practical and states that the point of any framework should be “helping people accomplish the goal.”

He walked the group through a set of exercises that helped convey the importance of understanding the outcomes that are most important to the organization and the team. These are individual to each team, organization, and culture, and there is not a one size fits all model.

For example, when one is trying to lose weight, they usually don’t care about the diet. His presentation also caused the group to think in different ways, for example, when viewing a photo of washing dishes, some may say the desired outcome is clean dishes, others said an empty sink and even other said a happy marriage.

Another example was when eating lunch – he showed a photo of two friends having lunch smiling and laughing, where the outcome was strengthening bonds, while another was of a business lunch, where the outcome appeared to be some kind of deal. Same activity, different important outcomes – however, neither required teaching the individuals how to eat.

It’s important to pick the stuff that people care about and surface perspectives. Don’t assume that the outcomes that one organization or team values will be universal to other teams. Also, place trust in teams to pick the outcome that matters to them; it can’t be forced.

The next exercise was about outcomes for a Sprint, which a similar voting, but this time it was Roman voting.

Next, it was Woody Zuill‘s The State of No Estimates. I chose this session because those that know me know that I find value in some level of estimates/high-level guesses. I was pleasantly surprised at how much I agreed with him and why he wanted to start the conversation about estimates.

He made it very clear that “it’s just a hashtag,” not a framework. Estimates are pieces of information, not facts. They’re meant to aid decision making. He’s questioning the value in spending a lot of time upfront estimating large work vs. breaking work into smaller bits to increase the chances of potentially valuable stuff. (the 80/20 80/20 rule).

As someone that would sometimes spend a month or two planning a six to eight-month project, I completely agree with this. This habit should be questioned and determine if it’s still working for the organization.

This was my favorite quote from the session:

He explained a situation that he encountered in his previous life that resonated with me – it was a large, many month project, and the team planned in six week increments. At the end of six weeks, they realized that their estimates were wrong and the requirements changed. So, what’d they do? They got training on how to do better estimates and implemented change control. What happened six month later? They realized their estimates were wrong and their requirements changed. What did they do? More training.. and on and on and on. Woody calls this the Cycle of Continous Non-Improvement. There was no assessment of the root cause the realizations were just symptons.

It was a great session, and I appreciated hearing the perspective and reasoning for the conversation from Woody himself. He also offered a warning for people not to go back and propose this at their jobs because a few people have told him that they were fired for bringing it up dogmatically that estimates shouldn’t be done. More pictures can be found here.

Then, it was time for lunch. I did the same thing – had lunch at the restaurant in the hotel and did work. The person sitting next to me had been working all morning, and she missed all sessions. I felt bad for her.

After lunch, I wandered around the exhibition hall to find some materials to bring back to the office. I left the gauntlet after getting what I needed; it’s just too hectic for me to linger, play games, talk with booth reps, etc.

Then it was time for Johanna Rothman‘s workshop on Growing Your Servant Leadership. This was one of the sessions I was really looking forward to because I enjoyed Johanna’s books immensely, and I was touched that she remembered me from our email correspondence (maybe it helped that we have the same name 🙂 ).

The workshop covered the basics of the areas and goals of a servant leader.

Then we broke into triads where we practiced coaching – exchanging roles as Coach, Coachee and Observer for 30 minutes. It was fun to discuss issues with others and work on coaching and listening skills. The observations and feedback that I received were really helpful.

After the triad conversations ended, one person from the triad went up to place our issue in one of the seven Servant Leadership boards.

Next up, was Kara Minotti Becker’s Women in Agile: I Want to See You Be Brave. It was a good session to help women find their voices, leveraging some stage acting tips. The full presentation can be found here. The exercises were a little confusing to participants, and the I gained a lot of value through the conversation that I had with my partner in the exercises. It was a high-energy session, and I’m sure participants walked away with at least one tactic that will help them.

After the sessions were done, I attended the Industry Analyst Panel Discussion: Agile Trends and Future Directions, and I’m very glad it was recorded because I’m going to need to watch it again to capture all the tidbits and insights. One of the points I tookaway was when a participant asked if the name Agile needs to change, and the consensus from the panel was “no” because Agile has such a brand now.

That wraps up another day. Can’t wait to see what I learn tomorrow!