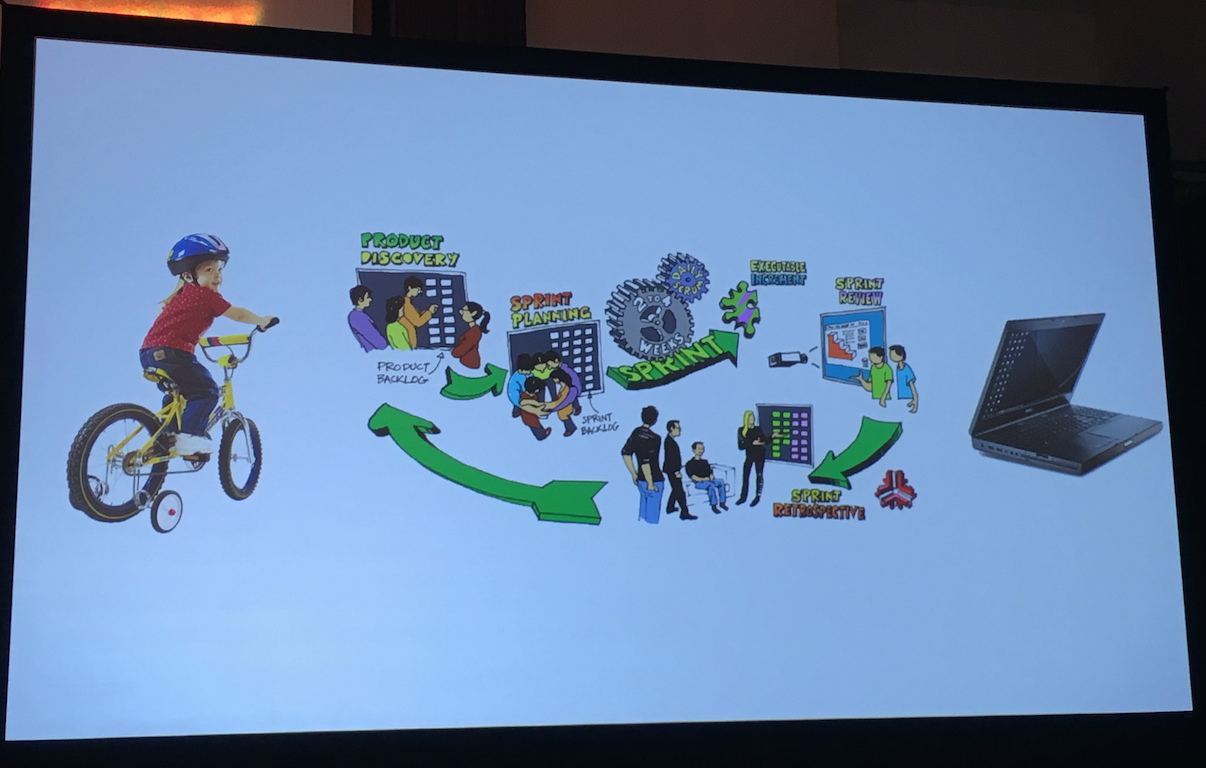 After a very good night’s sleep, it was time to start Day 3 of Agile2016. The morning Keynote was Joshua Kerievsky‘s presentation on Modern Agile. What is it the kids say these days? It was A-MAZ-ING!

He shared stories and examples of why “traditional” Agile is becoming a little outdated – the Scrum processes are like training wheels, and maybe we need something else as we learn to ride this bike called agility, like a push bike.

When the video is posted online, I highly recommend anyone reading this blog post to watch it. The area that stood out the most to me was the concept and the importance of Psychology Safety.

It was a provocative session because a lot of the “training wheels” that are so familiar to those attending this conference were being disputed. Combine this with Steve Denning’s comments at the conference, and it makes me wonder how all of those in the Exhibitor Hall are reacting!

Then, it was on to Stop talking to a Brick Wall – how culture impacts conversations about Agile with Peter Green and Jake Calabrese. This is one of my favorite sessions so far because it was highly informative and the presentation method really made it stick!

In it, we covered five world views that are likely the most common to our organizations and those who are in the organizations. Peter and Jake did a great job explaining the various pros and cons for each of the world views and how they can best be leveraged.

We went through an exercise where we role-played one of the colors and our partner had to guess which one we were playing. Then Jake and Peter brought in more of their team members for short skit of a retrospective on why the team is not meeting their commitments.

Had a lot of fun in this session and immediately downloaded the book Reinventing Organizations to read on the flight home.

Did the usual for lunch where I went to the restaurant at the hotel and had lunch catching up on emails.

After lunch, I headed down to Doc Norton‘s session on Building Blocks of a Knowledge Work Culture. Both being from Chicago, I’ve known Doc for a while now and really enjoy his perspective on culture and leadership.

Today, he shared how management styles align with the components of the Cynefin framework, and he did a great job overlaying the content so that it could be practically used because not all work is the same, and it requires different leadership styles.

In the middle of the Cynefin framework is Disorder, which is when you don’t know which context that you’re in, and in that case, we will operate in our preferred context.

Good Leaders in Command usual aren’t successful in the other contexts; when in Chaos, they’re usually seen as the Hero. In Obvious, that’s where we get most of our management success stories.

Very little is available for the management styles that support Knowledge Work, which is where most software development falls.

Building on Daniel Pink’s work in Drive, he then described the Four Factors for team motivation.

Autonomy is where team members self-organized and govern themselves – the “doers” decide. Manager just need to set broad direction and help the team move forward.

Connection builds on the understanding of the purpose or mission of the organization. Doc told the story of when NASA began working on the space shuttle, a layer of management was removed because it caused the system to be too slow, and all team members were given a radio. Each team had their own channel for their own use and to reach other teams, and every day at noon, teams would all turn to a particular channel and give updates.

Excellence means being challenged and seeing progress toward completing that challenge.

Diversity means diversity of thought. It means that when interviewing, instead of deciding if you “like” the person, if that person will flourish at the organization. Will the tension be good and healthy?

Without Connection, there are turf wars, mismatched product to market fit, brittle architecture, the bugs are in the seams between the teams.

No Autonomy means complacency and compliance and shadow systems.

No Excellence means apathy and mediocrity. This can either be in the product or how the team works.

No Diversity means homogeneity and lack of innovation.

Before his presentation, Doc introduced me to Anders Ivarsson, who is an Agile Coach at Spotify and one of the authors of the well-known Spotify Model. We had a great conversation, and I really appreciated the introduction because he gave me insight into something that they’re doing at Spotify that will help me immensely.

After Doc’s presentation, I headed downstairs to The Manager Role for Enterprise Agility – this is what Good looks like by Russ Lewis. I had very high hopes for this session, and I have to say, it was the most disappointing session for me; it was the first time that I left early. There were a couple of tidbits (below) in the presentation, but on the whole, there wasn’t much substance.

I liked this slide because it showed the disparity between the expectations of managers and team members.

Below are some of the other slides that more of the content that I was expecting; there’s good stuff here, there was just something off about the presentation and delivery.

Then, I headed back to the hotel to jump on a call before meeting a friend for dinner. Too bad I missed the event tonight, it looked like a great event!