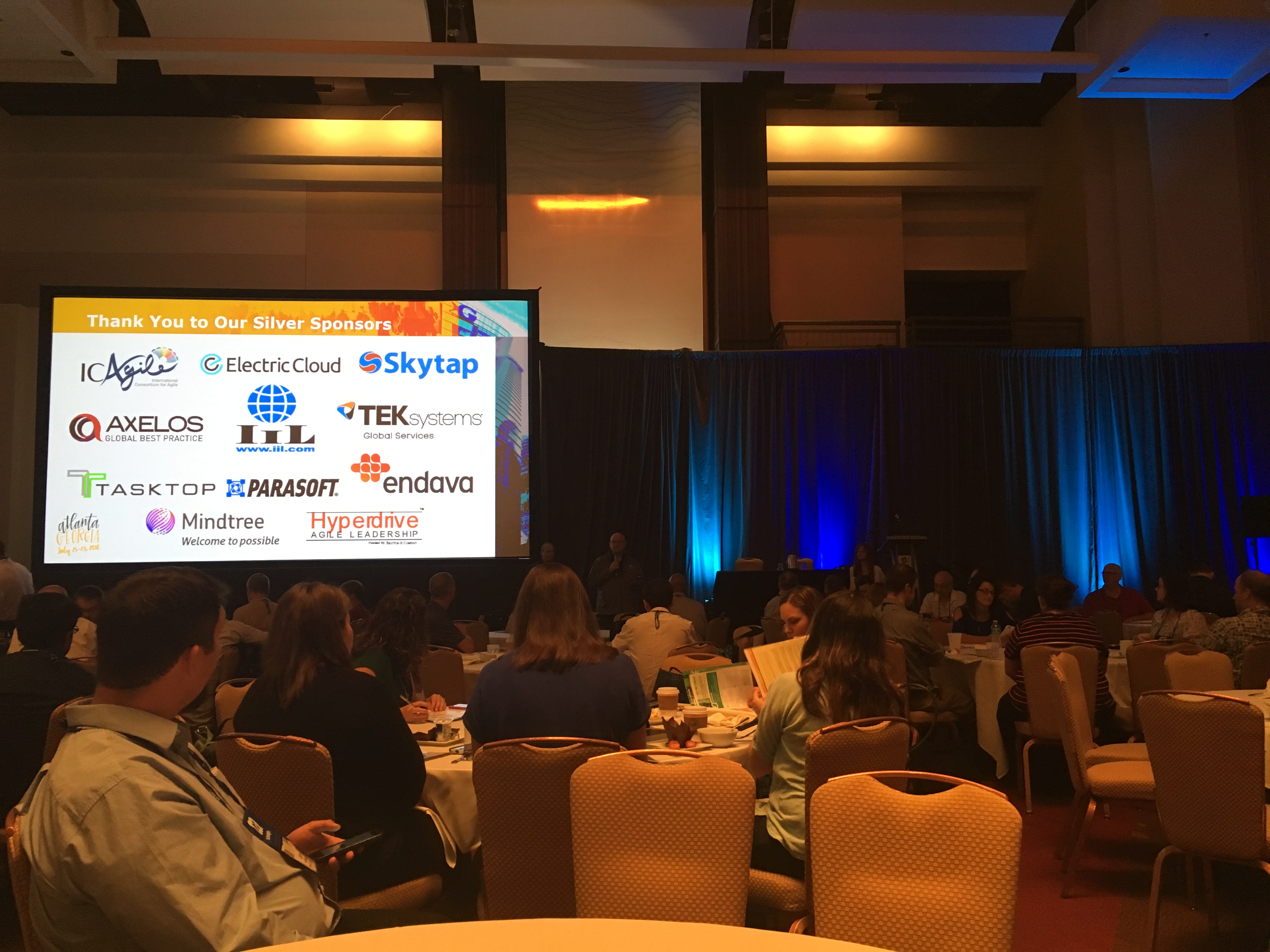 As I wrote the title of this blog, I almost wrote “Day 2” because of the wealth of information that was shared in five and a half hours of sessions (not counting the great discussions with fellow participants!) made me feel as though two days have passed!

My day started out at the New Attendee Orientation, which was a great way to learn about the flow of the conference and how to get the most of out it. Suggestions like the “law of two feet,” “it’s okay to skip a session if you need to” and “remember the important things, like drink tickets!,” helped set the cultural norms for participants.

After the orientation, I headed down to the Open Jam Daily Huddle and was welcomed to join – even though I didn’t quite know what I was doing – it turned out to be a great session where the groundwork and format was laid out for Open Jams later that day and throughout the rest of the week. Loved the themes and motifs to post topics to – Integration (by the Dock), Adventure (by the Artic) and Safety (by the Shipwreck).

Then it was time for the opening Keynote by Jurgen Appelo on Managing for Happiness. All 2500 Agile2016 participants gathered in the massive ballroom, and it was crazy! The largest Agile gathering yet, with participants from 42 countries.

His presentation can be found here, and below were the main points he covered were:

And that was just the first two hours!!!

Then, I attended Craig Smith‘s Coaching Nightmares: Insights we can learn from Gordan Ramsey. The presentation can be found here. I really appreciate Craig taking us through the below journey using clips from Gordan Ramsey’s show.

He was able to tie in the following models as he walked us through the journey:

My personal favorite was the “Powerful Questions Pyramid,” and him explaining that the “Who, When, Where” questions can be seen as confrontational.

I also enjoyed the conversation that I had with my tablemates before the session started. I learned (in the orientation) to get there early, and it also had the unintended effect of being able to chat/meet with others that also arrived early. For an introvert like me, it was way easier to open a dialog with someone at the table than go up to them randomly in the open areas.

Then, it was lunch time. I needed a little decompression time to process all that I had learned so far, some quiet time and to catch up on a few work related items, so I had lunch at the restaurant in the hotel.

After lunch, I wandered around the exhibitor hall but then ended up going to the next session early to get settled in.

The next session was Robert Wood‘s “Digital Disruption: Let’s create the future of Agile.” It was a great discussion on how Agile can adapt to help organizations have the agility, adaptability ,and flexibility to combat disruption. It was a great working session to capture what are some of the Common Limitations, Current Adaptions (to help with the limitations), Future Frameworks and the Future of Agile.

Through an interacted discussion, we filled out the sheets below with content, and it was great to hear others’ perspectives. One comment that stood out for me was “all of this is c the lens of a person’s level of understanding of Agile and what it means” and “once we realize Agile is not a silver bullet, it’s worth its weight in gold.”

There was a great conversation of how organizations are made up of mixed frameworks, and that might not be a bad thing because there “is no one way” to be agile, which got me thinking that the future of Agile could be how organizations can be set up to organically work to enable the work, support iteration, and the resourcefulness of team members. One person made the comment that as time goes on, the “old/process heavy” ways of working will no longer be the baseline for where teams want to improve from, it’ll be from the more agile ways of working, and thus a different mindset.

After a cup of coffee, the next session was David Hussman‘s “You Can’t Fix What You Don’t See: Visualizations That Spark Conversations and Change.” A group of us, Accidental Visualizers, as he called us, enjoyed a presentation from David, Ghera (Intel), Cliff (Spotify, who was remote from Sweden) and Brandon (DevJams).

The session opened with a video clip from Casey Rothenthal‘s visualizations at Netflix (link – the clip started at the 26:55 mark and ran for about 5 minutes)

Ghera introduced the group to Dooley’s definition of the Complex Adaptive System – “complex macroscopic collection of relatively similar and partially connected micro-structures formed in order to adapt to the changing environment and increase its survivability as a macro-structure,” and then she shared visualizations of the that were generated from data from a story survey that was done with team members.

The survey used the concepts of Sense Maker from Cognitive Edge.

Then, Cliff shared some visualizations from Spotify. The first was a stakeholder map that one of the teams created with stickies and lines because they needed to have a visual of all the groups that were using what they were developing. The line colors represented the frequency of the communication that was needed. This helped them remember who needed to be aware of changes to their services, identify groups that used their services that they didn’t even know existed and helped better understand how their services were being used.

The next visualization helped another team understand why build times were taking longer than they expected.

The goal of these visualizations was to provide team members contextual information when they need it.

David shared an interesting evolution of a typical Kanban board that evolved into communicating the completion of the product as a whole vs. what’s in progress. It was a great walkthrough, and I hope the slides are uploaded so that I can share them here. “People freaked when we moved the lines!”

The reason for this evolution is because some people aren’t interested in a “grocery list” of features, they’re interested in the “appetizer” that the work produced. I really liked how the backlog was morphed into a map vs just being time or priority based (both which are still needed), but this shook the “in progress” mindset. The stories were organized by interactions.

Brandon then shared a few ways to look at the impact of developer interruptions on their code-writing, and with their permission, installed keystroke loggers on their machines. It painted an interesting picture of just how many hours a developer is writing code vs. in meetings or other non-coding related activities. He also created a tag cloud based on user story/defect commits in Git to determine which files are touched the most, and why – user stories or defects.

He also shared and overlapping diagram of user stories/defects based on the areas of code that each one touched so that testing would know where efficiencies could be found in regression testing.

Below are some photos from Vinayak Joglekar:

Overall, it was an awesome day, and so much wonderful information was shared. I made new friends and connections, and even though I’m exhausted, it was worth it.