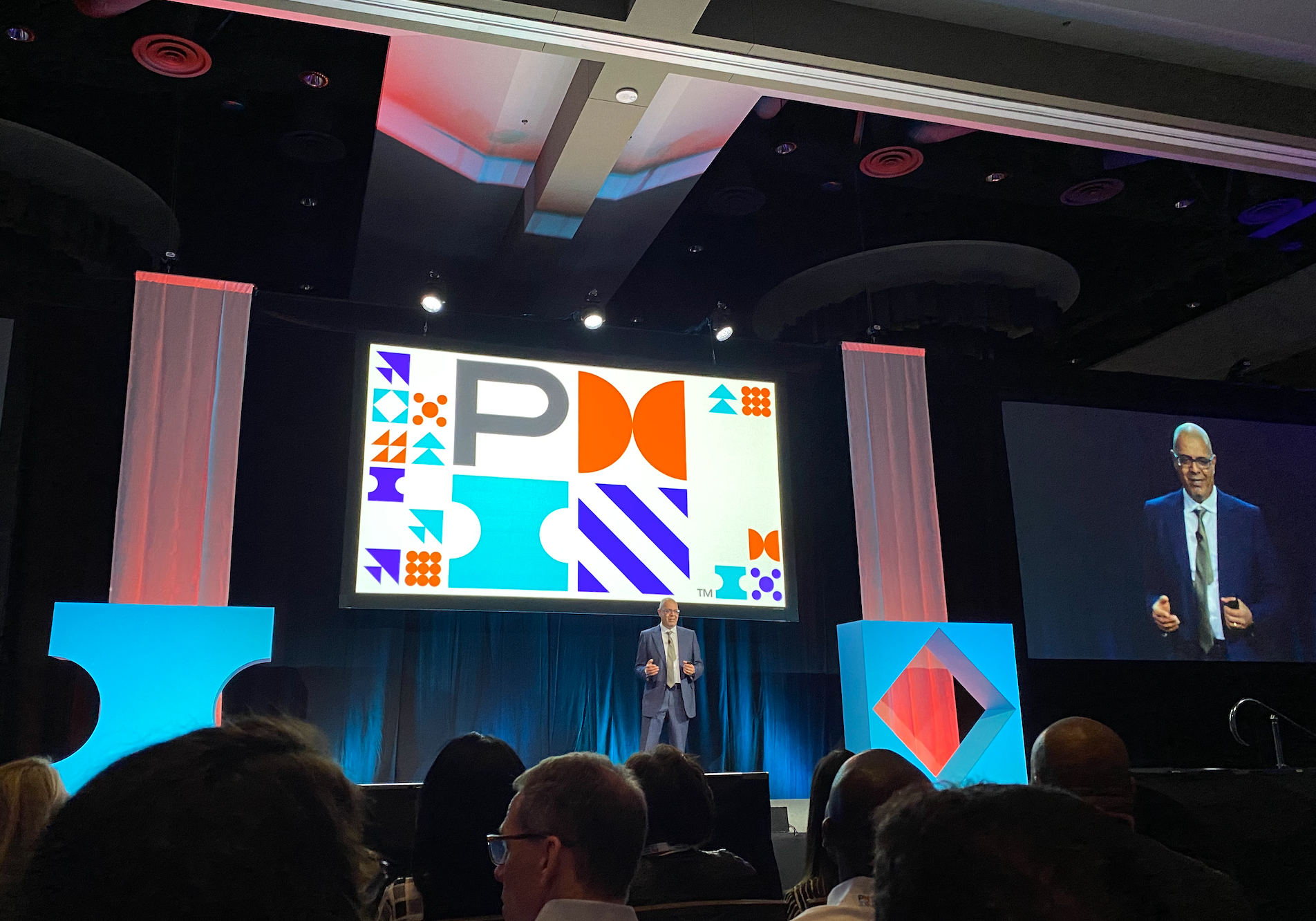 PMI President and CEO, Sunil Prashara got us kicked off this morning welcoming attendees and sharing that the event continues to grow every year – 30% bigger than last year. There are over 900 folks from over 65 companies and over 35 countries here.

He shared that PMI is partnering with TED, which is a great partnership given how missions align so well together – TED’s is spreading big ideas, and PMI’s mission is making ideas happen.

He shared that he hopes that we 1) learn, 2) network and 3) have fun over the next three days. Then it was time to highlight the nominees for the 2019 PMO of the Year, which are Fannie Mae, McDonalds and Saudi Aramco. The videos created for each of the PMOs were really cool, each describing more about the PMO team and the work that they have accomplished.

Then it was time to bring up Bob Safian, who is the Founder of The Flux Group and former Editor of Fast Company magazine.

He opened with a story about a Border Guard at the border of a sleepy crossing between two countries, not much goes on there. On day, a boy on a bicycle rode up with a long cardboard box across the handlebars of the bike. The Guard stopped the boy and asked what was in the box, and the boy replied “sand.” The Guard didn’t believe him and asked to see inside the box, so the boy opened the box, and there was sand. Thinking that something must be buried within it, the Guard dug his hands in and moved the sand around. Nothing but sand, so the Guard waved him through.

This happened every day for six months, every day, the boy would ride up, open the box of sand, the guard would search through it, and then let the boy go. One day, when the Guard was off duty at a cafe in town, he saw the boy. The boy was with his friends and looked to have a lot of extra cash. The Guard’s curiosity was getting to him – why did the boy need all that sand? So the Guard walked over the boy, and said, “Not sure if you remember me, I’m the Board Guard, and I’m off-duty, so I’m not going to do anything, but I have to ask. What did you do with all that sand?”

Bob shared this story to show the power of distraction and how easy it can be to lose focus on other areas.

He shared that he’s going to cover three areas: 1) Lessons of Innovation, 2) The Project Economy and 3) the Most Influential Projects.

This was a fun section of the session where Bob shared the top 50 most influential projects in the last 50 years. There is a lot of detail on the PMI website, so I won’t cover it too much here.

He closed with reiterating that the Project Economy relies on speed, flexibility and learning. It relies on asking, “can we do this better?” “if we were starting from scratch, what would we do?” That we need to be mindful of the next generation of partners, customers and employees; that there are micro-generations happening.

Inspiration begins with action. Being in service of producing tangible results, which is the purpose of project management.

What Problem Will Your PMO Solve Next Year – Bill Hoberecht, PMP

Bill opened with the story of a car accident he was in where his car was badly damaged, so he took it to the repair shop only to get “PMO’d.” He wanted to know how much it would take to fix it and for how long, but instead, the repair shop explained the process, the forms and everything else needed to go into the estimate for time and cost.

He talked about how PMOs can have a narrow focus that stops the PMO from being able to see opportunities for improvement or to add greater value. This usually also leads to applying a “one-size-fits-all” approach or believing that a PMO model can be just taken off the shelf and immediately applied to one’s own organization.

He talked about how bureaucratic intake processes can cause stakeholders to work around the PMO, disenfranchising the PMO, which usually causes a PMO to die a slow death. Another sign of this is when vendors work directly with stakeholders.

He asked that PMO leaders continuously ask themselves, “is this PMO relevant to the future of the business?” Do not allow the PMO to become irrelevant.

Also, he warns that PMOs can be focused on solving last year’s problem. Instead, look to the next year – what is coming up? How can we deliver the most value to the business based on where it’s going? PMO leaders need a strong connection to the business strategy.

Also, in addition to looking forward, what is it about current processes that may be irritants to stakeholders? What is irritating about them, how can the irritation be lessened?

Ways to show value could include, the value of delivered projects and the outcomes that were achieved. Look for universally praised results, and be lasered focused on ROI.

Another warning to not focus on tools and processes to ensure that there aren’t any opportunities being missed to add more value to the business.

How to keep your PMO relevant: 1) Listen – create forums and opportunities for listening to your stakeholders, 2) Understand – seek first to understand and then to be understood, 3) Partner – create that trusted partnership to build up credibility, 4) Be Transparant – and request transparency from stakeholders and 5) Collect Feedback on your leadership and your team.

Insights are everywhere if we look for them and ask. Be curious, gently probe, dig deeper into solution language to get to the need and the problem. Ways to measure PMO performance include the costs of the PMO relative to the portfolio size, project delivery performance and measurement of business performance.

I really enjoyed Amanda‘s session because it brought together two big passions for me – project management and increasing gender diversity in tech. She shared how an effort started out with one person, then three people because of a full-blown program at T-Mobile in a few short years. The small group leveraged their project management skills but having a project charter, tasks, communication plans, etc to be able to increase gender diversity in their company.

I really liked the idea of having nominations for women to go to conferences so that participants could get to know each other and talk about their experiences, which created tighter bonds. She shared how the group is also hosting various STEM activities with the local Boys and Girls Clubs.

She mentioned that when they started, they weren’t sure what to measure, but that didn’t stop them, the measurements came as they went along. When it comes to recruiting and ensuring that the candidate pool is diverse, she shared the anecdote, “when you go fishing, and you don’t catch the fish that you want, do you blame the fish?” If you’re looking to hire diverse candidates, go to where they are. She also recommended the Twitter account, Better Allies, which provides daily tips on how to be a better ally.

Thanks to PMI’s partnership with TED, we were able to enjoy two live TED talks that were really provocative about the future.

The first was Shohini Ghose, who is a Quantum Physicist and Educator, who shared how quantum computing could change how we currently leverage security and encryption techniques. Where, in order to break the encryption, you’d have to break the laws of nature. She also shared the latest findings on quantum entanglement, and how information has been able to be shared across that entanglement – teleported across space and time.

The second was Andrew Pelling, who is a Biohacker and Mad Scientist, who shared that one crazy idea, could we recreate Audrey 2 from Little Shop of Horrors, turned into research for how we can develop plant-derived biomaterials for medical research, reconstructive surgery and regenerative medicine. He shared how they leveraged project management techniques, such as a research canvas, and also how he believes that we don’t value curiosity and wild questions as much as we probably should.

Because I felt like I was starting to come down with something, I decided to call it an early night and head back to my room. Looking forward to tomorrow!