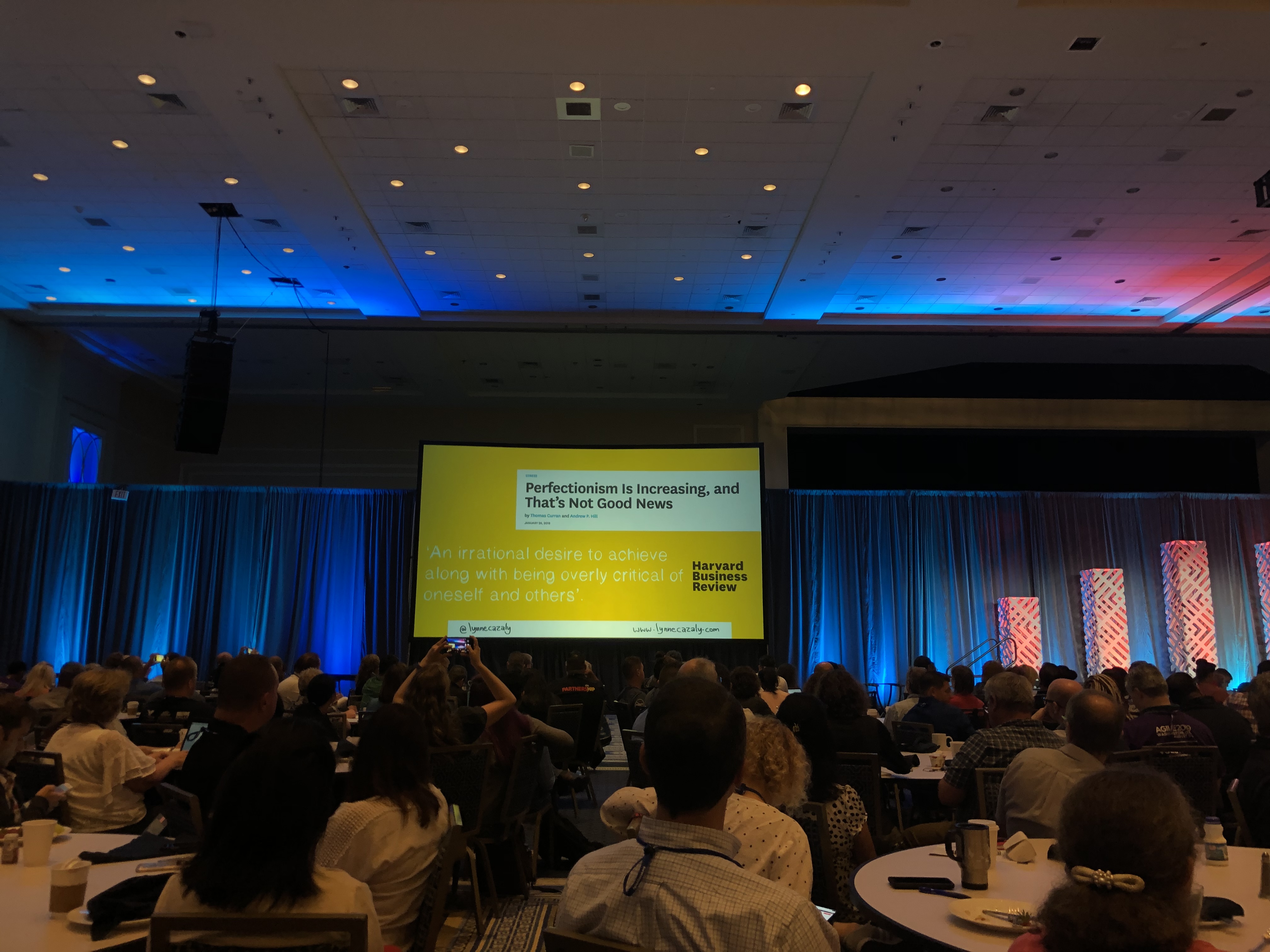 How is it Wednesday already? This week has felt really long with all the information that’s been shared, but it’s also going by really quickly!

Ish: The problem with our pursuit for perfection and the life-changing practice of good enough – Lynne Cazaly

As a former perfectionist, who still slips back into that behavior, I really appreciated this session. Lynne shared that perfectionism is on the rise – it’s the irrational desire to achieve and criticism of ourselves and others. However, perfectionism and high performance are not related, and perfectionism is usually described as the “favorite flaw.”

There’s a lie that perfectionists tell themselves – that working more on something will make it better. What research shows is that “at the task level, spending more time on something doesn’t result in it being better.” This leads to “higher stress, lower satisfaction, less recognition, fewer opportunities and less security.”

There are two types of perfectionism:

She shared stories of individuals who worked late into the night to have a “perfect workshop” where all the chairs in the room were the same height, and the story of someone who was relaunching their website, but they didn’t have a recent photo, and couldn’t take a photo until their hair was done, and their stylist was out of town for six week.

There needs to be simple, low fidelity version to help things keep going. We as humans, tolerate some errors and omissions, including the Pratfall Effect, which is when we show imperfection and people’s perception of us goes up. When we make mistakes we are perceived to be better, so let’s show our faults.

Lynne shared the concepts of Maximizing and Satisficing. Maximizing is where more is better, the best is better, so we’re constantly gathering information. Satisficing is going for “good enough,” and it helps counter perfectionism.

Also, Lynne brought up the Spotlight Effect, where people are paying less attention to you than you think; they’re worried about their own stuff. You’re seeing the blemishes and the issues because you’re so close to it; others aren’t paying that close attention.

There’s also Wabi Sabi, a Japanese tradition of celebrating the imperfections of the world because they tell a story. When a bowl breaks, the bowl is put back together with beautiful joinery.

We need to make sure we start (which helps procrastination), and we also need to know when to stop (to counter perfectionism).

Then it was time for a couple of work calls, lunch and hanging out in the Women in Agile spot at the Agile Alliance Lounge.

I really liked ElMohanned’s session. He brought together several national cultural frameworks and shared the contexts and dimensions that could impact agile teams who are working with team members from a variety of cultural background. Dimensions included:

Individualism is the degree of interdependence, the “I” vs “We” mindsets and which comes first.

Cultures that are high on the Uncertainty Avoidant context are threatened by ambiguity, and those that are on the lower end of the context will accept what comes as it comes.

Long Term Orientation focuses on a culture’s importance of tradition and new ways of thinking in the nearer term.

There were two exercises in the session – one to pretend that we were anthropologists and we discovered this new Agile culture made up of Agilists. Where are the beliefs, values, behaviors, artifacts, language and heroes that are in their culture? The second was to discuss how the various contexts help or hinder a team working in an agile way.

It was a really fun and education session, and I really liked how the topics of our differences were discussed in a very matter of fact way and got the discussions going at the tables.

Hendrik and I had exchanged emails on LinkedIn about PMOs two years ago, so I was excited to see his session where he shared the story of the work that he did at Ericsson to create their new PMO.

Highly recommend reviewing his presentation, and below are some of the points that resonated with me:

They ended up with a self-stabilizing system, and they are continuing to experiment their way forward.

Another great day; after the sessions, took a few more work calls and have now enjoying dinner on the waterfront, recharging for another full day tomorrow!