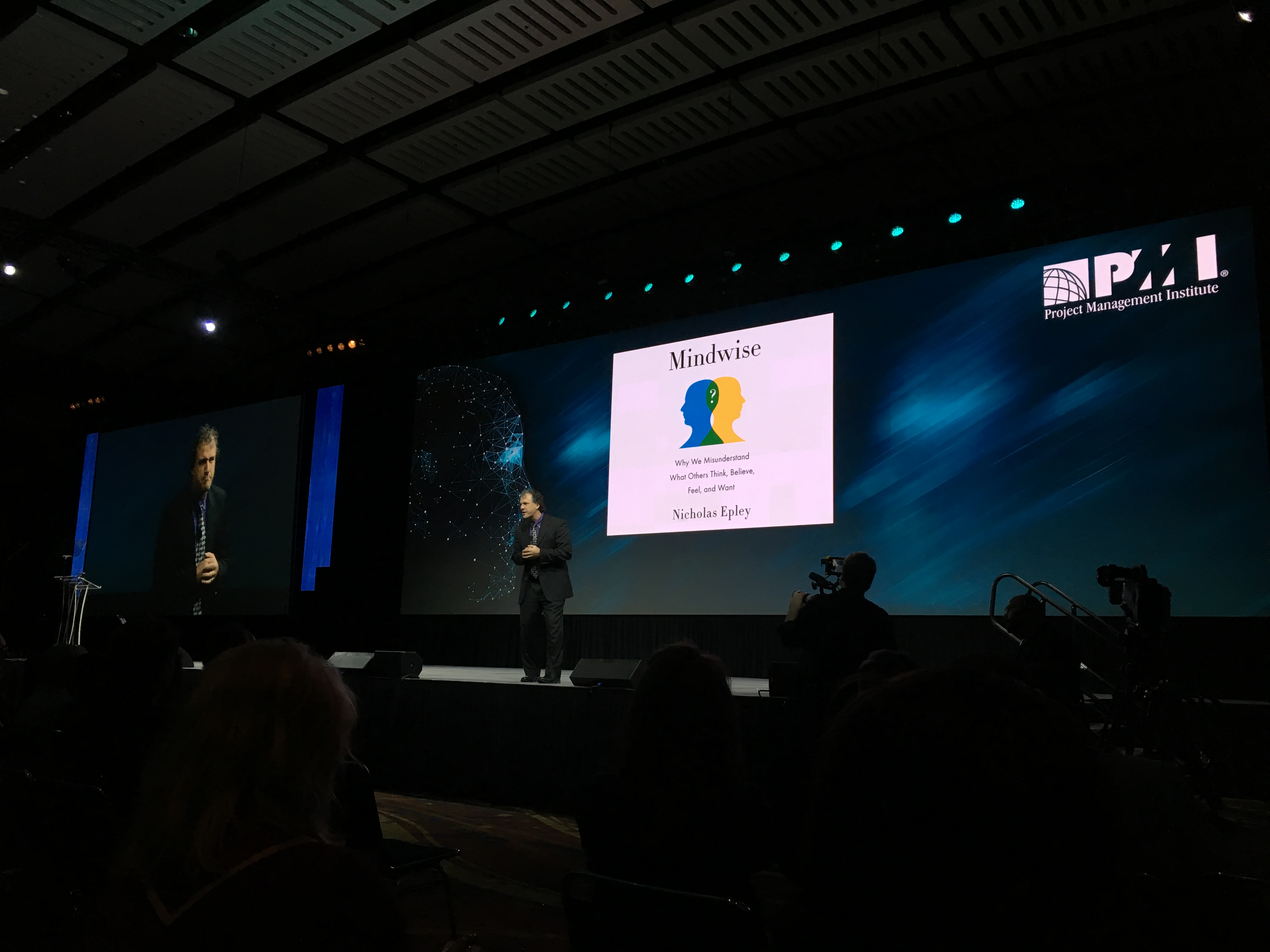 Dressed warmer today, and it helped make a difference. I was so cold yesterday. Let’s recap Day 2!

Mindwise: How We Understand What Other Think, Believe, Feel, Want

Today kicked off with a keynote from Nicholas Epley providing insight from his new book. Nicholas is an engaging speaker and gave some great advice. He shared the story that when he was writing his book, he summed it up to family and friends as a book that would “help you read minds.”

We as humans already have this superpower because we’ve learned it via our ability to deal with complex social environments. We have the capacity to interpret a person’s desires and intentions via their actions (or least think we can). For example, if we see a person reach for a bottle of water on a table and accidentally knock it on the floor, we’ll realize that the person is probably thirsty. We can do this as toddlers. Do this action in front of chimpanzees, and they will have no idea what you’re trying to accomplish.

We as human are concerned with what people are thinking – we recognize that they think and are curious about it (especially are they thinking about me???)

He then explained that how accurate we are at understanding someone else’s thoughts and perspective depends on what we’re being tested on. For example, if you’re testing someone batting ability and an average person throws the pitches, they’ll do pretty well. However, if it’s a major league pitcher, it’ll be a different story.

Misunderstanding is just a factor of social life.

He describes two experiments. The first where participants rate themselves on a particular factor, predict how others will rate them and then others actually rate them. This is surprisingly hard and the results show no significant correlation with how we rate ourselves and how others rate us. It also shows that we’re overconfident in our ability to see how others see us.

The second was with married couples with an average marriage length of 10 years, which also showed that the other spouse’s ability to predict their spouse’s responses to questions was no better than chance. However, spouses thought they did better than they did – they were overconfident at predicting responses. We think we understand more than we do.

So, what keeps us from understanding? Why do we think we’re better at predicting?

Much like our other senses, our mind reading ability only works if it’s engaged (think of your vision, it isn’t engaged if your eyes are closed).

The first reason is an error of engagement – we tend to dehumanize other people. We’re familiar with our context, our beliefs, we spend the most amount of time with our minds, not theirs, which creates a distorted view of Self vs. Others. We fail to see their mind.

We treat others like they’re mindless, and don’t have thoughts and feelings because we haven’t experienced them, nor can we see of feel them.

The other reasons include:

Egocentrism – he spent a lot of time on Egocentrism because it is perspective bound. It’s an in-body experience, creates a lens of beliefs and perspectives.

Then, my favorite exercise – count the “F”s in this paragraph:

How many did you count?

He explained the curse of knowledge and how it can cloud your perceptions. In the exercise above, strong English speakers will sound out the OF as V, which causes people to miss the two Fs. You’re always with yourself.

That then led him to describe one of the more liberating studies in psychology, called the Spotlight Effect from 1998. In this experiment, groups of six students were selected and one of the students was singled out. That student was pulled from the group and asked to wear a t-shirt with Barry Manilow on it. He was then brought into the room with the other five students who were taking a questionnaire. The selected student was then removed from the room and the remaining students were then asked to fill out a separate questionnaire on who was on the person’s t-shirt. There were four choices, students only guessed correctly 25% of the time, which is equal to guessing.

People think of us less frequently than we realize.

So how to do we improve?

Perspective Getting is the better approach. A person’s mind comes through their mouth. Also, because over confidence in our abilities is an issue, we need to also have humility.

Below is the summary of his guidance:

Mark Dickson then took the stage to announce the winning slogans that went on the t-shirts – I am a Value Amplifier and I am a Strategy Implementor.

Organizing for Projects: At the Crossroad of Benefits Management and PMO

In this session, Monique Aubry, shared the results of her and her team’s research study, which won an award last night at the Gala. The study focused on how project benefits are managed. Strong note, these are not HR Benefits; these are the outcomes, goals, benefits to be realized once the project completes.

She spoke about how PMOs can play a strategic role and aid the organizational design. The organization is being designed for successful delivery. It provides clarity into investments and project management as well as responsible for delivering those project benefits.

She shared the assumption that we are “reflective practitioners,” who want to do our best and constantly making sense of the past to orient and adapt the current situation. That we are always learning.

She said that she’s picking up a trend that we’re focusing on short-term wins vs. the longer term wins.

Then she began to describe how stakeholders view benefits differently. They have different expectations and priority around what will be realized and when. There is also a gap of who is realizing the benefits because that doesn’t have a role in standard project management frameworks.

There is also a value judgment when it comes to time – at the time the project was complete, it could have been deemed very beneficial; however, decades later, it might be deemed a failure given the changing circumstances.

Benefits in one organization may not be the same in others; there needs to be a shared view and values. We take for granted that there is understanding – however, these groups do not speak to each other very often. There also needs to be an acknowledgement that there are different values.

In her research she came across three frameworks:

She shared the first example – Sales to Operational Budget.

Example #2 – when the users’ view is incorporated.

Example 3 – when a separate project is spun up to realize the benefits:

Her first insights into these frameworks were:

She then spoke about how the PMO can leverage the intersection between projects and benefits management. That some chaos is okay for innovation. PMOs can help discover where do we have new opportunity, what are some of the emerging benefits? How can we challenge the team more?

So, in conclusion, she mentioned that we need to ensure that we’re integrating benefits management and realization, and make sure that we’re not taking for granted that others can see the benefits to be realized.

After lunch, it was time for the next session.

Leadership Lessons We May Have Learned – But Might Have Forgotten

Rob Kurtz and Melissa Panagides-Busch gave a fun and engaging presentation on leadership lessons and used skits to build the connection to the reminders.

They talked about the difference between leadership and management, citing an HBR article by Buckingham, that:

They argue that Project Managers have an overlap with some leadership competencies, such as:

Leadership is about “moving people to a future state,” similar to project progression.

They then moved on to the Human Element, which discussed Patrick Lencioni’s Five Dysfunctions of a Team, and the importance of building vulnerable trust.

Rob then shared the story in the book Change about the Elephant and the Rider. The concept is that in a person’s brain, there is a Rider and an Elephant. To create change, one needs to 1) Direct the Rider, 2) Motivate the Elephant and 3) Shape the Path.

To Direct the Rider, one needs to 1) Show the bright spots, 2) clear the path; script the critical moves and 3) send a destination postcard of where they’re going. Laziness is usually exhaustion of trying to control the Elephant.

To Motivate the Elephant, one needs to 1) Shrink the change, 2) find the feeling, 3) grow the people.

To Shape the Path means to make the change as easy as possible.

They then discussed the importance of psychological safety and creating the vulnerable trust with others. That the project manager is dedicated to the team and is there to make them feel safe. Typically the project manager will know the whole picture and can help the team see it.

Then they moved into the importance of Knowing Yourself. They discussed various ways – StrengthsFinder and The Birkman Method.

What does this mean to us? Leadership lessons are only good when they’re applied and that as project managers we can be both leaders and managers. Leadership is a choice, not a position.

New Rules for Building Engaged Teams in a Digital Age

In this session, Agata Czopek shared the new rules for what it means to have engaged teams in the Digital Age, which is a publication from Deloitte Consulting.

Below is a summary that compares the Old Rules vs. the New Rules. It was a good presentation, however, most of the content can be found in the publication. However, I did like how she stressed the importance for teams to be close to the customer and rapidly prototype and learn.

The Necessary Culture for Soaring Performance

In this session, Karen Chovan provided a number of useful types on how to increase cross-team collaboration, which is different from cooperation. We want team members co-creating (collaborating) vs. just compiling (cooperation).

She shared a story of when she was working at a mining company, and they needed to reduce waste down to zero. She explained that she brought together individuals from each of the sites to explain their challenges and pain points. The group quickly realized that they were all feeling the same pain – it then turned into a conversation about how they could help each other solve their problems. They brought the problems into groups and then had small teams focus on the solutions across all the sites – vs. each site trying to solve their individual problems. It created ownership with a shared vision and holding each other accountable.

She also touched on the importance of psychology safety and connecting work to the reason of being there; the connection to strategic goals. When she showed the Toyota engagement survey results, which were in the high 70%s, she remarked that “there was high participation because everyone wants to share what they’re working on.”

And that wrapped Day 2 of the PMI Global Conference. The final day, Day 3, is tomorrow.

Also check out the blog posts from Day 1 and Day 3!