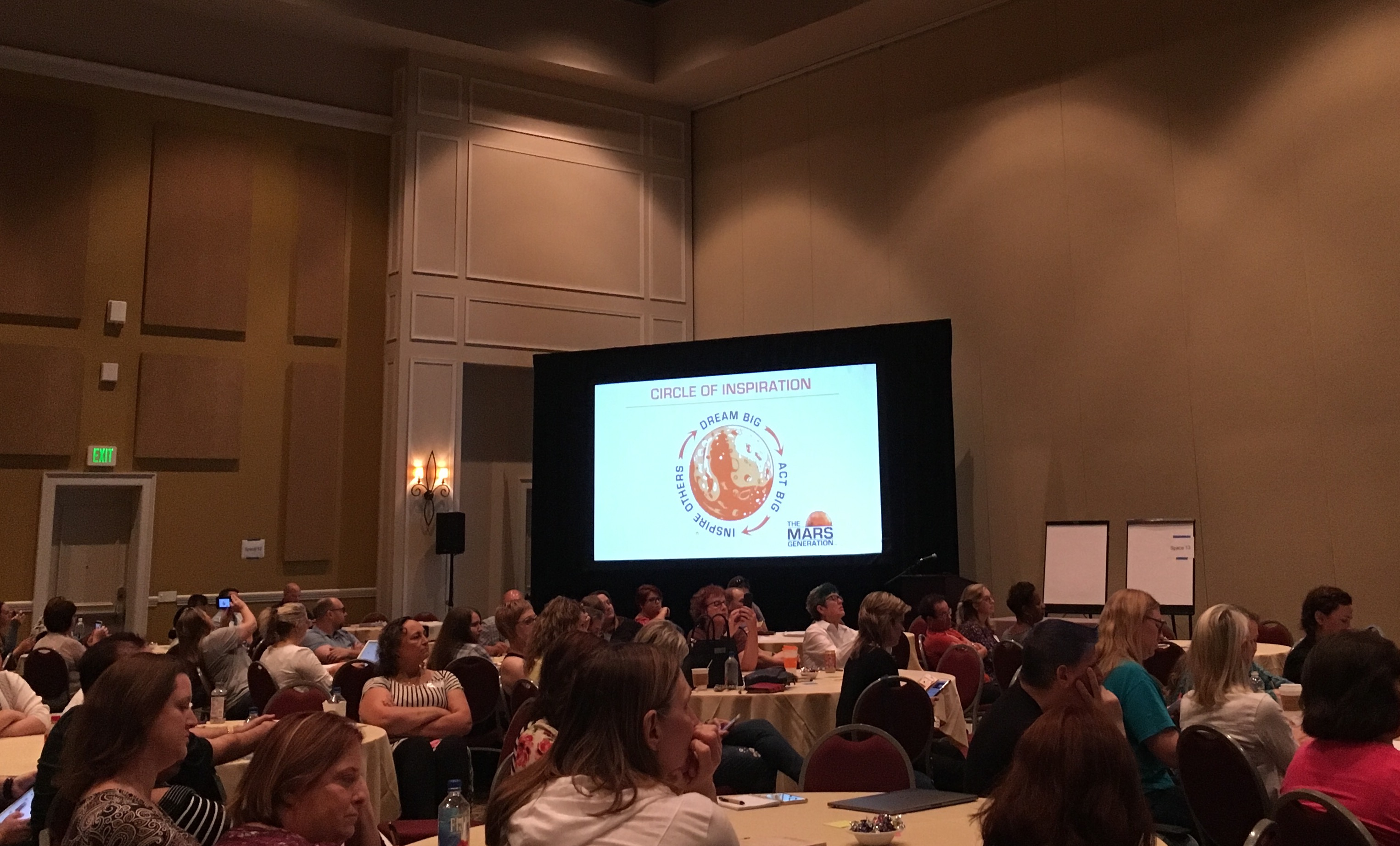 Wow, where to start? I guess like all things, I’ll start at the beginning of this amazing day.

Kudos to the Agile Alliance for choosing a runner friendly hotel. I ran a quick two miles around the property, specifically the nature reserve, and fortunately, I didn’t run into any snakes or other wildlife. A quick search on Twitter showed me that others who arrived early had done the same.

After breakfast, I continued to practice my Lightning Talk for the Women in Agile workshop later today. At 11am, I met the wonderful Laura Powers for coffee and final prep for my talk. It was great to also hang out with Natalie Warnert, Jenny Tarwater, Eric Willeke and Doc List.

At 1pm, the workshop started, and it opened with Paul Hammond giving an overview of the new Code of Conduct for the Agile Alliance.

Be kind to others. Behave professionally. @AgileAlliance code of conduct. #Agile2017 ❤️ pic.twitter.com/tKVT796Jn7

Then we moved into the Keynote, which was given by the inspirational Astronaut Abby, a twenty-year-old who has the goal of being the first person on Mars. Hearing the stories of how her family and people in the space community supported her in her early years brought tears to my eyes. She has founded The Mars Generation foundation, which helps promote STEM – “Making Stem Cool Again.”

There were many great learnings from her keynote, and I loved the concept of the Circle of Inspiration = Dream Big, Act Big, Inspire Others.

After a break, we started an Open Space Market, which was a lot of fun. We had over a couple of dozen topics that ended up in the Marketplace, and they were all great topics. Each fit into one of the following categories:

For the first session, I joined the group discussing blogging and some of the challenges that new bloggers face, e.g. obtaining permission from their company in order to blog personally or how to find quality advice in a sea of opinions. We walked away with some ideas for the Women In Agile website and some curation ideas.

The next session I attended was the one I proposed which was inviting the wisdom of the group to figure out ways of how we can increase awareness that not all tech and agile jobs require coding/engineering skills or a Computer Science degree. It was a great discussion, and we came up with a number of suggestions, including one that the Agile Alliance could sponsor high school students to attend this conference to create more exposure.

Another session that was proposed by one of the men in the audience as “how men can help be advocates for women in tech and agile.” I wasn’t able to join that group, but Lynn Winterboer along with others, including Chris Murman, will write a blog post on “How to Help Men Become Better Allies.”

After a very quick run (and I mean run – if you saw a woman running in heels around registration, that was me) to the restroom, it was time to start the Lightning Talks.

I was first and had a momentary internal freak out when I realize wouldn’t be able to see my speaker’s notes the way the presentation was configured. But, I figured it out. My talk was on Gender’s Impact on the Ability for Agile Teams to have Meaningful Feedback Loops (can be found here). Laura did a phenomenal job introducing me, and it wasn’t until about 90 seconds in that I realized, “Oh my, there’s an audience here, I’m not just practicing…” Even without my speaker’s notes and nerves running throughout my body, I kept going. I was an awesome experience, and I am deeply appreciative of it – one rarely gets a chance to speak to a group of people who only want to support you.

Next up was Linda Podder, who spoke of her journey as a Scrum Master and trying new experiments. She’s doing some interesting things with her team, including self-selection and mob-programming. Her story about stepping out of her comfort zone of being a tester and moving into the Scrum Master role was very insightful.

Then, empowering speaker, Susan Marricone, closed us out. She spoke about how agile has created a number of wonderful opportunities for women now that we’ve left the command and control days.

Her analogy about how agile creeps like ivy is spot on!

After several rounds of Appreciations, which were very touching. We closed up the workshop and then headed out to the bar for the Happy Hour.

Registration was also starting to pick up as people arrived in the late-afternoon. Hugely grateful to the “purple shirts” (volunteers) already!

I am shocked and touched by the number of women who came up to me afterward and said that my talk resonated with them. Laura Powers and I had our celebratory margaritas, and then this introvert needed to head back to the room and recharge.