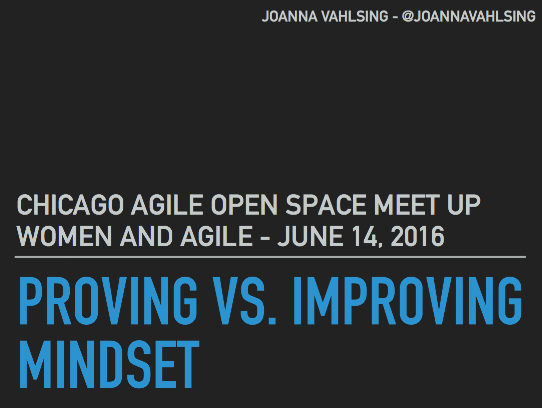 Last night, I had the honor of participating in a Chicago Agile Open Space (CAOS) panel event with four other women. Huge thank you to Bill Allen for bringing this great group of women together to share their stories and experiences working in agile. The format was 5-7 minute talks from each panelist and then a panel discussion, and it was hosted at Centro (where I work).

My topic was the Proving and Improving Mindset and the Impact on Agile Teams because based on a 2015 Harvard Business Review study, gender played a role in which mindset an individual had a tendency to experience.

The full text of my talk is below, and the presentation can be found here.

One of the goals of agile teams is to become learning, adaptive and responsive to current conditions to achieve an outcome. Retrospectives are deemed by many as the most important ceremony of Scrum. Without regular feedback, assessment, understanding and a bias for improvement, an agile team cannot operate at optimum health.

Today, I want to share with you a particular barrier to achieving that optimum health, one that studies have shown to differ between genders. My hope is to increase awareness amongst the agile community.

In your organizations, do you ever wonder, “why do some people react defensively to feedback?” and “why do some take it in stride?” Have you noticed any gender differences in how people react?

In 2015, Harvard Business Review gathered data on how people react to feedback. They called the defensive tendency “proving” and the accepting tendency “improving.” Their definitions were very close to Carol Dweck’s “fixed vs. growth” mindset work.

What they found was:

“People with a growth mindset tend to focus on improving, learning, and effort; while folks with a fixed mindset assume that our abilities are based more on inborn talents and traits and unlikely to change. The former seek out challenging situations and welcome feedback, including criticism. The latter strive to prove themselves to others, using their existing skills. They tend to avoid feedback and criticism, and usually select tasks at which they can look good and succeed.”

When they reviewed the data, they found that respondents orientation to either a proving or improving mindset was influenced by three factors: Age, Self-Confidence, and Gender.

Regarding Age, as we age, there “is a gradual evolution of a proving mindset into an improving mindset.” They theorized that “as we age, we simply become more self-aware – and it may also have something to do with confidence,” which was the second major factor they uncovered.

Regarding Self-Confidence, they found:

“The best predictor we could find of people having an orientation toward “proving” was their lack of confidence. Those who scored highest on our confidence percentile were more likely to have an improvement mindset.”

This is also where imposter syndrome comes into play – the fear that they don’t really belong in their role, and they’ll ultimately be discovered and fail. Imposter syndrome has been found to be prevalent in high-achieving women. This lower self-confidence also impacts one’s likelihood to speak up during retros and contribute feedback to the team.

If there is also a fear of failure environment in the organization, this can be even more pronounced and erode self-confidence.

What they found about Gender:

Also, women are subject to the “prove-it-again” bias, in which their competence is constantly (and unfairly questioned).

Prove-it-again bias – in a study by Joan C. Williams, 2/3 of women interviewed encountered it. Women have to provide more evidence of competence than men in order to be seen as equally competent. A woman mentions an idea, the idea is ignored, a man brings up the same idea, and the idea is heard When seeking a promotion, if there are 9 things that need to be achieved, women will do 10 before asking for the promotion. Men will ask for it when they have 6.

So what can we do as an agile community?

Be aware of these tendencies as we observe our team members’ candor and ability to provide feedback to each other, especially at times of reflection and retrospection.

Looks for ways to encourage shifts in team member’s behavior to steer them toward developing a growth mindset. If someone is sensitive to feedback, suggest that they start with small doses of feedback and work their way up.

Team members can also change the language that they use when praising to foster that growth mindset – “your effort really paid off” vs. “your report is brilliant.”

Team members also need to emphasize that mistakes are learning opportunities rather than cause for embarrassment or punishment.