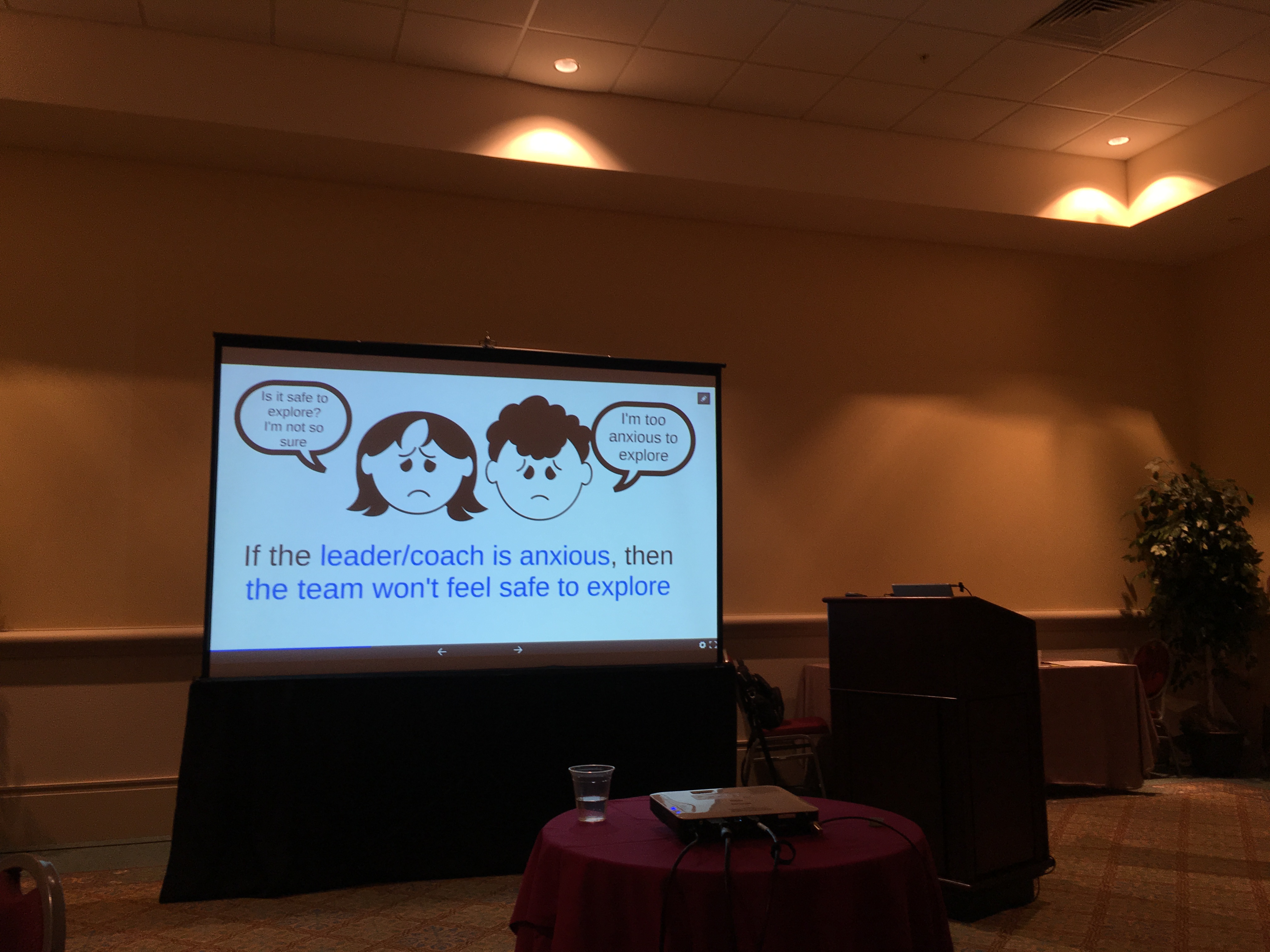 This morning was focused on exploration and continuing to push me out of my comfort zone.

First up was the Stalwarts Session with Lyssa Adkins, and my only expectation for the session was to walk out with some Lyssa Adkins’s magic. When I had the chance to talk with her and meet her at Agile2016, I found that I walked away from the interaction with so many gifts.

This morning, the format was for individuals to come up and ask Lyssa questions. Below are some of the sound bites/learnings from the session:

I loved the Stalwarts session format – it was a great way to connect with Lyssa and other thought leaders in the other sessions. In future conferences, I will attend more of them.

Next up was Lightning Talks, and I felt much better about my talk than I had at the Women in Agile Workshop. The latest version of the talk can be found here.

The session was filled with a variety of topics – below is the full list, and Peter is working on getting all the slides posted:

After the lightning talks, I grabbed lunch by the pool, and then it was time for the afternoon sessions.

What’s in your role? Elevating the Scrum Master role at Capital One

Marie Dingess and Jennifer Honermann told the story of Captial One’s evolution in software development after the acquisition of ING Direct. As a former client of ING Direct, things started to make sense for me.

Capital One technology is a very large organization (over 10,000 employees, or Associates, as they’re called). There are over 500 Agile Coaches / Scrum Masters.

They told the story that they moved away from a centralized focus to a decentralized focus, and also placed greater emphasis on building vs. buying and weaned themselves off third party consultants. The adjusted their tech to ensure that teams could work more independently, and adopted a “you build it, you own it” culture.

As they went down this journey, they also re-evaluated what it means to be a Scrum Master for Captial One. They played a great video on the value that their Scrum Masters bring to the teams – snippets on that value from team members: “Lots of freedom, more responsibility to the team, doesn’t enforce process for the sake of process, removes impediments, raises issues, gatekeeper/protects the team, team focused, great communicator, great listener, facilitator, pulls the team together, sets standards, and the oil that keeps the engine running.” You get the idea.

They shared the evolution of the role over the last five years to be one that’s also focused on the flow of delivery and also have included some technical understanding.

Likening a Scrum Master’s skills to those of a person cooking to a chef, they began to think of things on a continumum.

They shared the idea of the three dimensions that a Scrum Master needs to balance:

I’m curious where Captial One continues to take this work because the career path for a Scrum Master is something that I’ve always wondered. From my view of the work in project and program management, I can see the career opportunities and growth for team members.

Next up was one of my favorite sessions of the conference, Patterns from child psychology to build safety in teams: the Circle of Security framework

I studied child psychology and development in college, so this session piqued my interest. I’m also a firm believer in the need for psychology safety for people to be able to perform at their highest abilities.

Matthew Hodgson and Mia Horrigan explained The Circle of Security Framework, which shows that children need a safe space/safe hands to return to “fill their cup” after exploring the world has become stressful and/or has made them anxious. When the “world” is not okay, they need a safe place to retreat.

Imagine a beach scene – rolling waves onto the shore, a palm tree blowing in the wind. Now, play the theme from Jaws over that scene. Scary, right? Go back to the same scene, play some peaceful, new agey music. Calming, right? Same scene, the music caused different reactions.

Throughout the talk, they brought up Maslow’s Hierarchy of needs and how it can translate to teams.

There was an overarching, “if the leader isn’t in a good place and is anxious, the team member won’t believe that they’re a safe space.” That’s why self care as a leader is important.

But, what does safety mean? It takes different meanings in different cultures. In Hierarchical Cultures, like those in Asia countries, Hierarchy is reassuring.

What can we as leaders do? What’s the expectation of our team members?

Matthew and Mia then shared a quadrant to show the dynamics of Psychological Safety and Motivation and Accountability.

I really liked this slide that helped articulate what happens in an anxious person’s mind.

How can we help team members move from this square to the learning zone?

It also helps to recognize feelings, including those that you’re not comfortable with as a leader. Remember other people’s feelings can trigger strong feelings in us.

I will watch video (hopefully there is one) of this session, it had so much power in it.

Can’t believe that today is the last full day of the conference. It’s been an amazing experience, and I’m already excited for Agile2018!