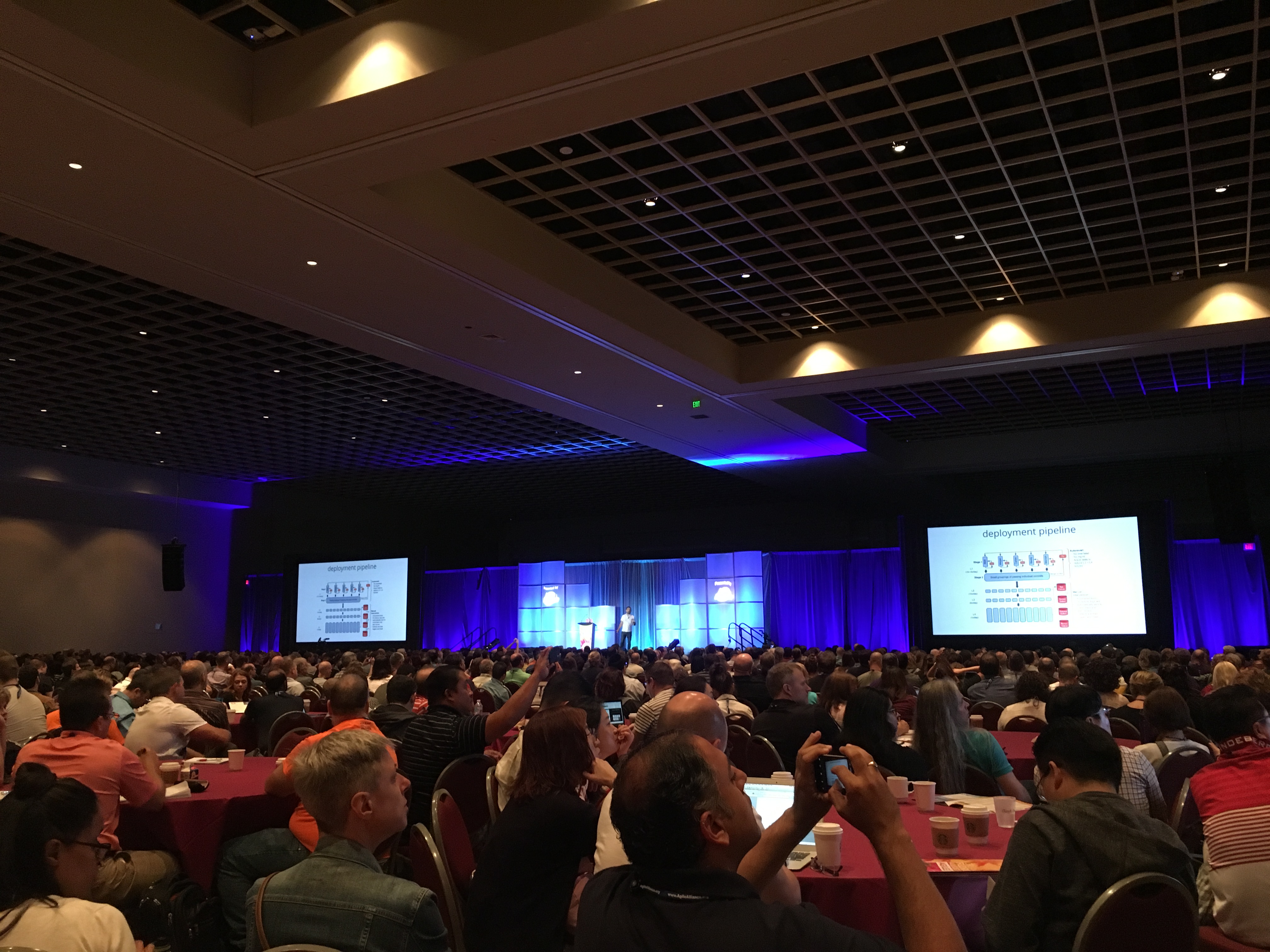 Joined Jez Humble‘s keynote session a little late because a woman who attended the Women In Agile Workshop reached out to me to have coffee in the morning to pick my brain on career advice. I had assumed that she was part of the conference, but it turns out she just attended the Sunday workshop, lived in Orlando and reached out to me. I am impressed by her ambition – I don’t think I would have had the courage at that point in my career.

I covered my reactions to Jez’s “extra” content in this post so this recap will focus on the content from the main purpose of his keynote, Continous Delivery in Agile. My apologies for only include the last 30 minutes or so.

Jez told the story of Hewitt Packard Laserjet printers and how the company needed to decrease the significant amount of costs and increase the amount of innovation. Their current architecture and processes were stifling new feature/innovation work to only account for 5% of the time, and they wanted to strive for 50% of the time.

He explained that one of the first steps was for managers to walk around and “ask dumb questions” on why things were the way they were. Small incremental changes were introduced and behaviors, such as coding in small batches, were encouraged by the way that the branches were cut and automated tests were run. Eventually, HP got up to 30,000 automated tests and virtually eliminated the need for manual regression tests.

From a planning perspective, they adopted a “lower precision, more accuracy approach.”

Then Jez told the story of SunCorp and how they were able to leverage test automation for mainframe green screens. Green screens responded surprisingly well to automated tests.

He brought up that when Adrian Cockcroft from Netflix was asked, “Where do you get all your good people?” Adrian responded with “I get them from you.” As W Edwards Deming said, “A bad system will break a good person every time.” Jez then went into the NUMMI work between Toyota and GM. If you’re interested in the full details of that story, I highly recommend the This American Life Podcast episode on the subject.

After the break, it was time to attend:

One Portfolio Progress Report across All Project Types – It Can be Done!

Geri Winters shared a progress report that could be agnostic to any methodology that focused on Time, Scope and Budget process. She stressed the difference of how teams and executives need different information – for example, teams don’t usually think about the money that they’re spending, where executives care quite a bit about how much is being spent.

Geri provided a really good tactical approach to mathematically arrive at progress against those variables and provided some good advice on what can and can’t be done with the report.

Below are some of the slides. It would be difficult to explain here how to set up the report, so if you’d like more info, feel free to ask me (or reach out to Geri).

After lunch, it was time for:

Asking over Telling: Using humble enquiry to build trust and do great work

Ellen Grove and Bruce Scharlau lead a workshop that introduced concepts of Humble Enquiry (not Inquiry, that’s the scary word) to the group. We learned the various types of listening 1) Me, 2) You and 3) Us (along with crazy arm motions).

We’re usually conditioned to be very task-oriented and not relationship oriented. Meaning, I’ll listen to you as long as you’re doing what I need you to do, not because I want to create a meaningful relationship with you. We tend to ask questions that aren’t really questions, they are tests.

Humble enquiry asks us to determine how we can come from a place of openness. There are three types:

They then led us through an exercise to help us understand powerful questions, and introduced us to the “you idiot” rule, which is where you can test your question if “you idiot” naturally follows it.

The session ended with tips to keep the powerful questions handy and for us to keep in mind that status, power, and rank in a relationship can change the question dynamic, and to be mindful of our tendency to finish tasks vs. building a relationship.

Then it was on to:

Chris Murman gave a talk on an alternative to Brainstorming, which he calls the “Kleenex of ideation” because the name has become synonymous, but it doesn’t mean it’s the only way to generate ideas.

He explained that our current approach of brainstorming is flawed and can be improved by Brainwriting.

Brainwriting is the technique where you gather team members to generate a list of ideas, each team member writes down a certain number of ideas (or how many in a timebox), and then hands it off to the person to their right (or left) for that person to refine and/or add to. A certain number of “rounds” happen and then the group comes together to “combine and refine” the ideas.

This technique focuses on the output vs. the social components of a group brainstorm session, and reading other ideas generates more ideas.

Another great day – can’t believe tomorrow is the last full day. This week is going by quickly!